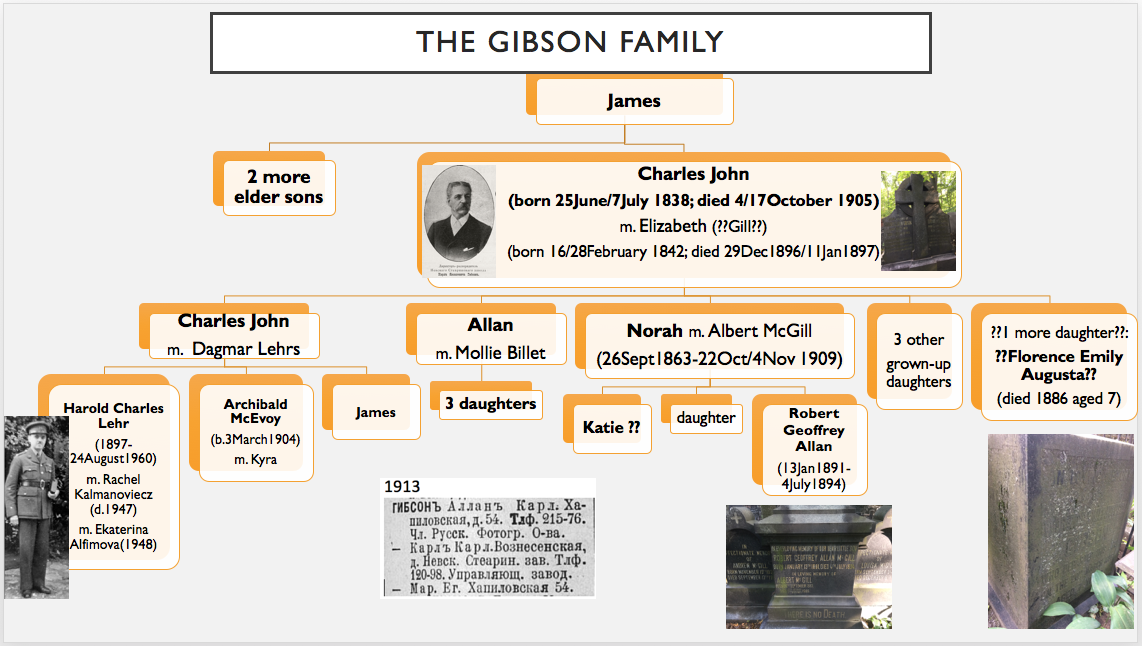 Charles John Gibson, managing director of Nevsky Stearin Works (Sir William Miller & Co) in Moscow, was known in Russia as Karl Yakovlevich Gibson. We are lucky to have his 1896 photograph thanks to the factory listing in the catalogue of the 1896 Al-Russia Exhibition in Nizhny Novgorod: 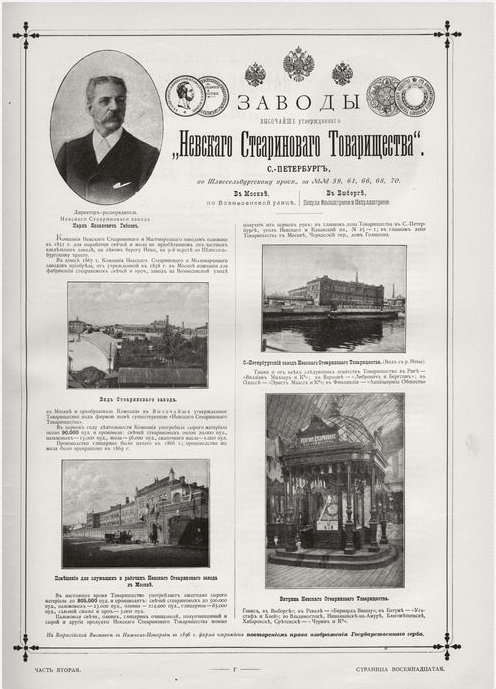 Nevsky Stearin and Soap Company was first started in St.Petersburg in 1851 by Cazalet, Miller and Cron. In late 1867, the Company bought  a similar factory in Moscow in Voznesenskaya Street (to the right of the big green park on the maps): 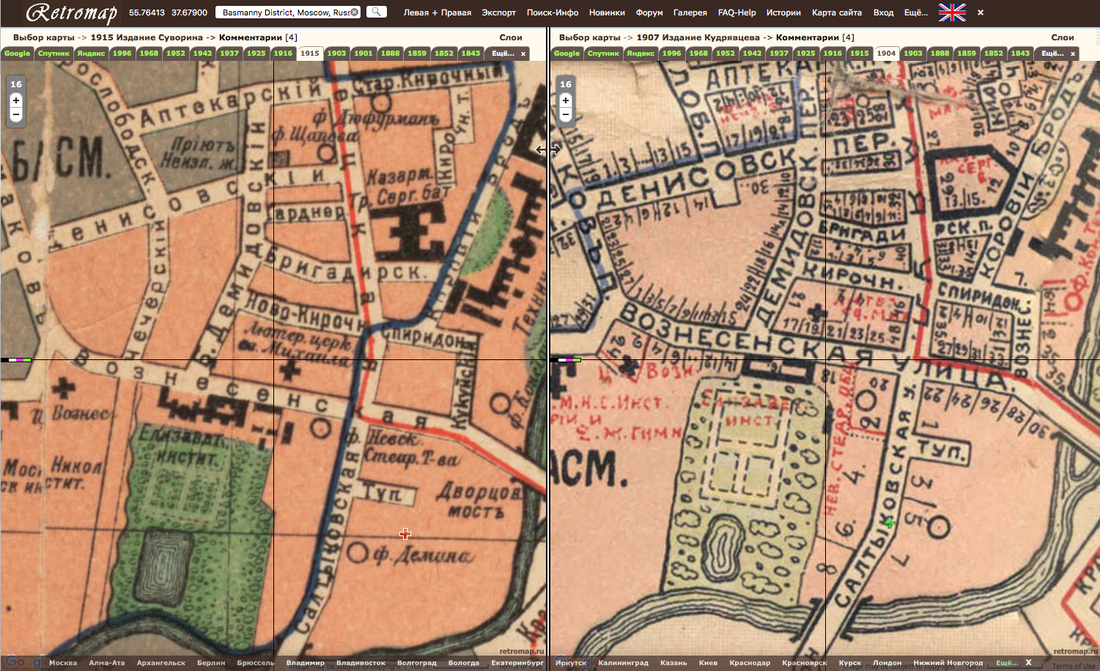 Charles John and Elizabeth Gibson had two sons: Charles John (Junior) and Allan, and four daughters, one of whom, Norah, married Albert McGill, Robert McGill's nephew.
Charles John (Junior) followed in the footsteps of his father and was also a managing director at Nevsky Stearin Works. Some additional information about the sons can be found in Moscow address books: ​Around 1901, Allan Gibson married Mollie Billet - niece and practically adopted daughter of Allan Bowe (see also Pigott family), Fabergé's partner, who arranged for him to manage the Fabergé branch in Odessa. Allan and Mollie had 3 daughters (this information comes from Alan Bowe's descendant Wendy Bonus's book). Back in 1913, though, according to the Moscow address book, they were back in Moscow. It is interesting that Mollie is listed in Russian as "Мар. Ег." - probably Maria Egorovna (her father's name was George - Egor in Russian): 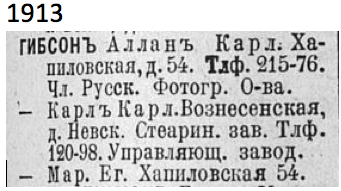 There are many facts about the Gibsons that we know for certain from documents, yet there are other things that we can only guess.  Who was Charles John's wife, for instance? Her impressive tombstone next to the tombstone of her husband in Vvedensky cemetery does not give her maiden name: 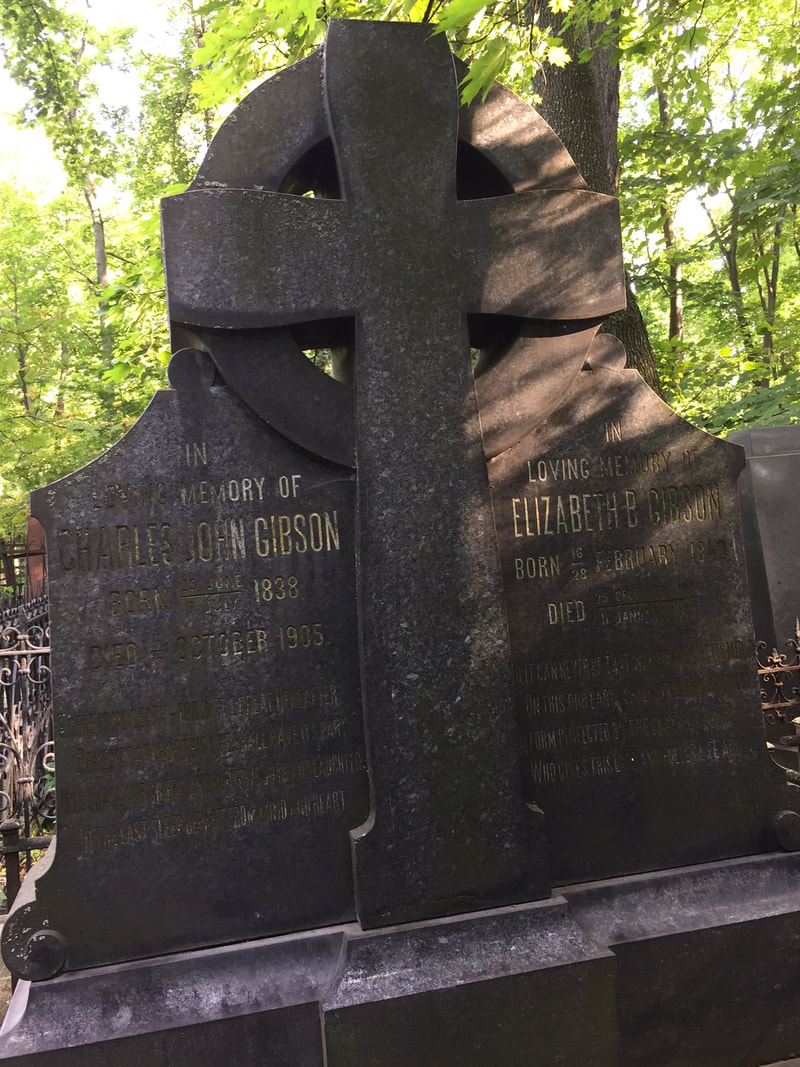 Yet, at the same cemetery, not far from the grave of Robert McGill, there is a tomb with three inscriptions:
ELEANORA GILL, died 1 July, 1883 aged 66
FLORENCE EMILY AUGUSTA GIBSON, died 20 March, 1886 aged 7
ALEXANDER GILL, died 20 February, 1893 aged 75
It seems to be quite possible that Florence Emily Augusta Gibson was one of Charles John and Elizabeth's daughters, and if so, probably buried in the same plot with Elizabeths's parents - then Eleanora and Alexander Gill could be Elizabeth's mother and father. But we do not know for certain either of those facts. Here is the photo of their tomb: 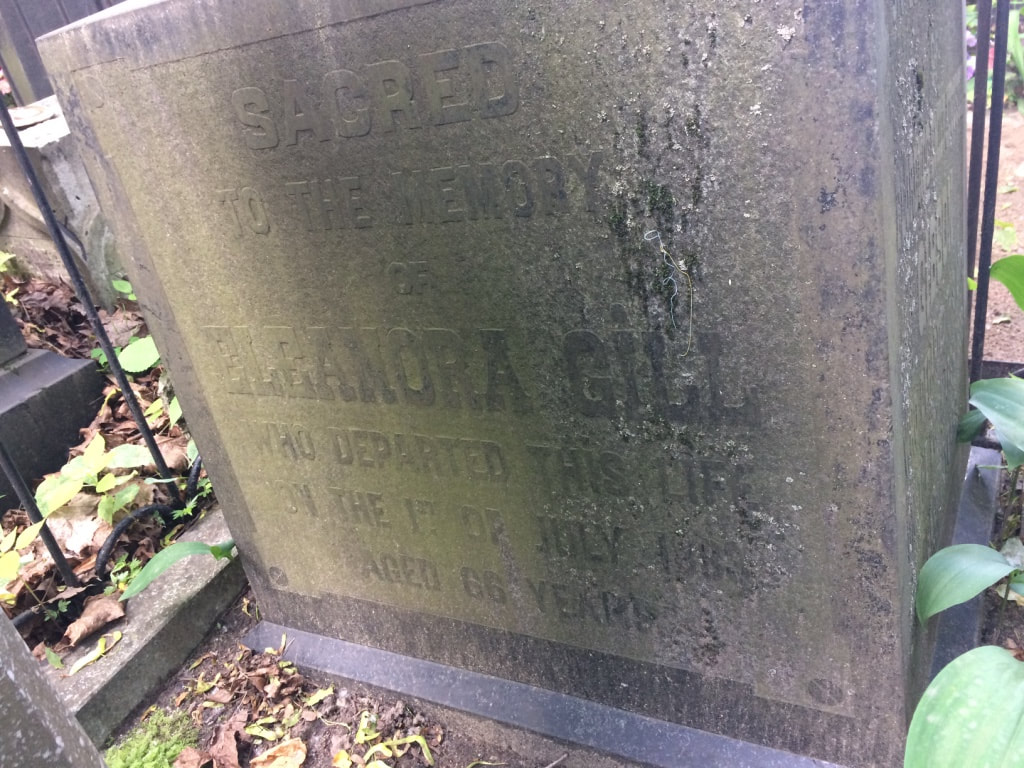 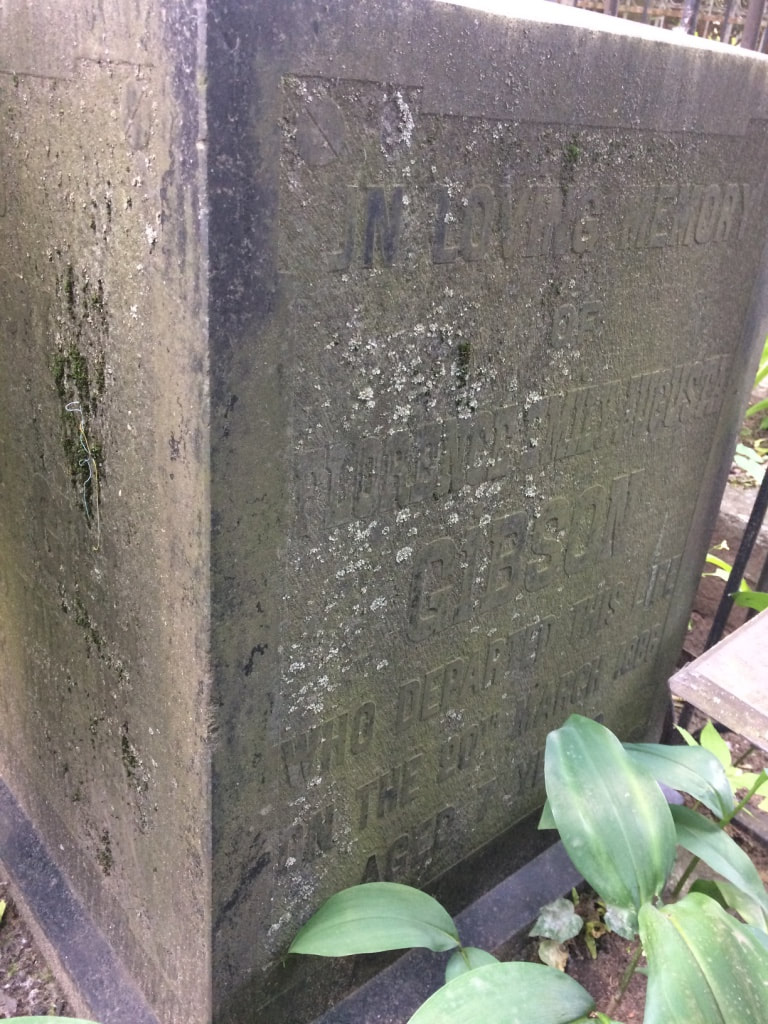 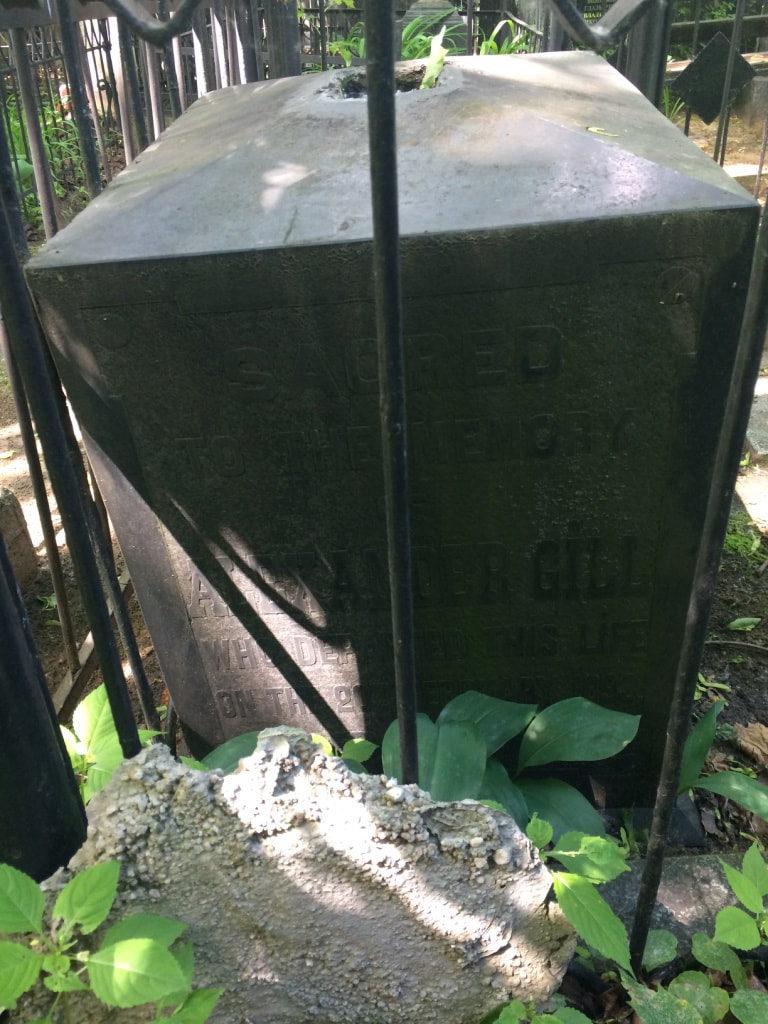 Charles John Junior and his Sons: Harold, Archibald and James

Information on Charles John Junior and his family can be found in the book "British Clandestine Activities in Romania during the Second World War" by Dennis Deletant.
From this book we find out that Charles John Gibson (Junior) married an American lady by the name of Dagmar Lehrs. They had three sons: Harold Charles Lehr Gibson, Archibald McEvoy Gibson and James Gibson.

Harold was born in Moscow in 1897 (other sources claim he was born either in 1885 or 1887 which is probably incorrect). He attended primary school in Moscow from 1909 to 1913 and then completed his education at Tonbridge School. He also studied at the technical faculty of Moscow University.  In March 1917 he was recruited into MI6 for his knowledge of Russian, was attached to the British Consulate General in Moscow as a clerk, in October 1917 was transferred to the Military Permit Office of the British Embassy in Petrograd and in March 1918 returned to the Consulate General in Moscow. He left Russia for London in October 1918 with the remnants of the British and French Missions - and probably the rest of his family. From then on he held different posts around Europe and spent most of WWII in Istanbul as head of MI6 station. He held his last post in Rome where he was station head from 1955 to 1958, when he retired as a Major. He remained in Rome with his second wife Ekaterina Alfimova (he married her in 1948) who ran a ballet school there. On August 24, 1960 he was found in his home shot dead, presumably having committed suicide due to money problems (official reason). Here are some photographs that can be found on the Internet: 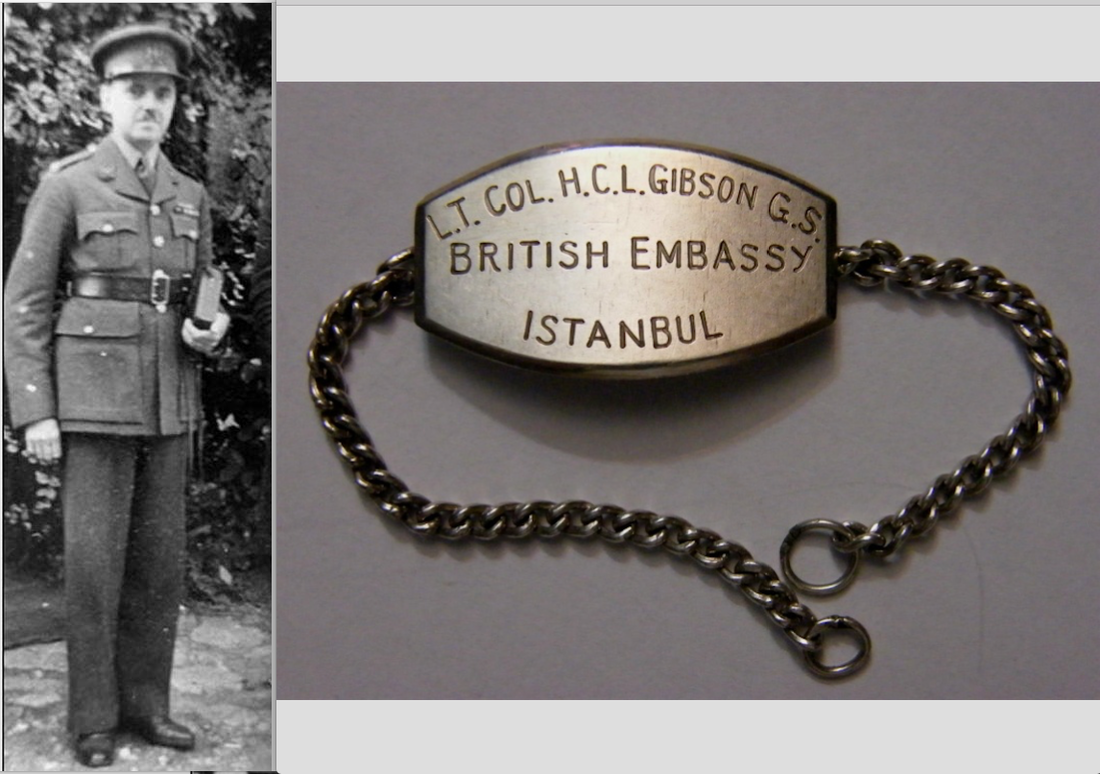 Archibald was born in Moscow on March 3, 1904. Here's what Dennis Deletant writes in his book about Archibald's younger years. 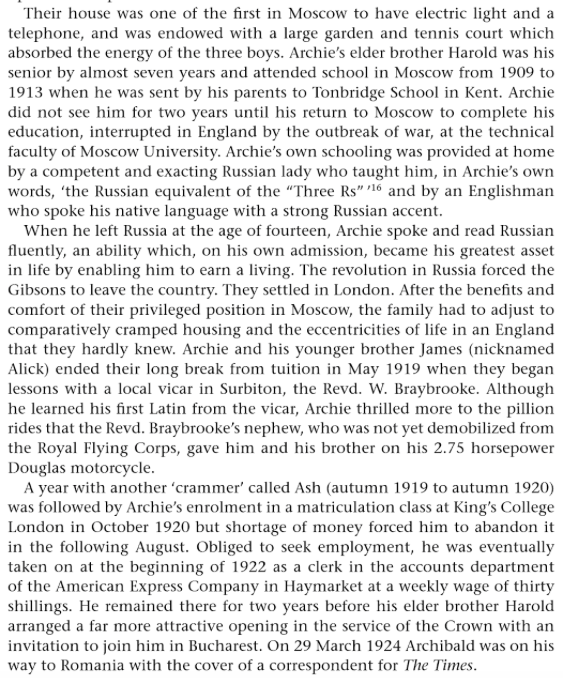 Dennis Deletant managed to find all this detailed information about the brothers from the documents that were preserved by Archibald's widow Kyra.